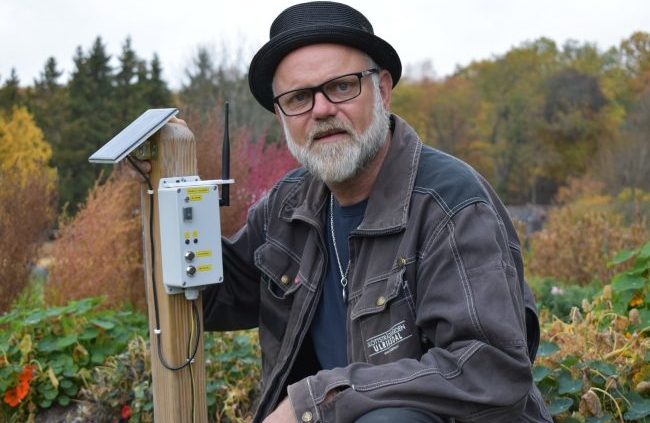 Slottsträdgården Ulriksdal (Castle Garden Ulriksdal), with farmland of about a hectare, was the first farm where IRRIOT AB installed their precision irrigation system. In 2018, we let the system of nine wireless solenoid valves powered by solar panels handle the irrigation, around the clock for five months, with exceptionally good results.

– The system of wireless solenoid valves has worked perfectly, without a single shutdown. It has been a great success. Especially during the hot summer, the system was extremely beneficial from several perspectives, says Bosse Rappne, CEO at Slottsträdgården Ulriksdal, when we asked for a comment and review of the first season of the irrigation system.

– We have been able to program in advance for watering automatically at night and thus saved an estimated 30-35 percent of the total amount of water due to minimizing evaporation. At the same time, we have saved hundreds of man-hours and money, says Bosse Rappne, and notes that evenly distributed irrigation, in turn, has generated high-quality products, which meant good sales.

One of the major advantages has been that many plants grown on the fields became big and loose. And if you want to have water in depth, irrigation is required for a couple of hours with water sprinklers. However, a lot of water often ends up on the leaves, which causes the plants to lean. With IRRIOT’s solution, you have been able to irrigate for half an hour at Slottsträdgården Ulriksdal, returned an hour later and thus eliminating lean crops.

– As always, when it comes to new technology, you are initially uncertain. But it has been great to be able to log on to your computer, sit home at night and see that everything works. For example, you eliminate the human factor to forget to close the valves. And soon you can check everything from your mobile phone, continues Bosse Rappne, emphasizing flexibility.

– Since valves are solar-powered means that there are no electricity cables. If you want to change anything in the irrigation system and have valves in other places, it’s easy because it’s wireless. A simple hose could be put on the ground and connected to the valves for better distribution. The solenoid valves you can put wherever you want. The only need is to have a water source in place.

Anything else worth mentioning?

– We know that monocultures on larger surfaces destroy our soils in the long run. Vegetables and our best soils do not need to be close to the property. They can be located on fields further away since this system works on several kilometers of distance. Also, it is very easy to remove the solenoid valves and quickly store it for winter, says Bosse Rappne and concludes;

– Watering a farm or garden is alpha and omega that requires a lot of knowledge and I would like to have full control myself. Being able to water crops evenly and at any time of the day or night, at several kilometers away, is a good investment. This is definitely the future.

This site uses cookies. By continuing to browse the site, you are agreeing to our use of cookies.

We may request cookies to be set on your device. We use cookies to let us know when you visit our websites, how you interact with us, to enrich your user experience, and to customize your relationship with our website.

Click on the different category headings to find out more. You can also change some of your preferences. Note that blocking some types of cookies may impact your experience on our websites and the services we are able to offer.

These cookies are strictly necessary to provide you with services available through our website and to use some of its features.

Because these cookies are strictly necessary to deliver the website, refusing them will have impact how our site functions. You always can block or delete cookies by changing your browser settings and force blocking all cookies on this website. But this will always prompt you to accept/refuse cookies when revisiting our site.

We fully respect if you want to refuse cookies but to avoid asking you again and again kindly allow us to store a cookie for that. You are free to opt out any time or opt in for other cookies to get a better experience. If you refuse cookies we will remove all set cookies in our domain.

We provide you with a list of stored cookies on your computer in our domain so you can check what we stored. Due to security reasons we are not able to show or modify cookies from other domains. You can check these in your browser security settings.

These cookies collect information that is used either in aggregate form to help us understand how our website is being used or how effective our marketing campaigns are, or to help us customize our website and application for you in order to enhance your experience.

If you do not want that we track your visit to our site you can disable tracking in your browser here:

We also use different external services like Google Webfonts, Google Maps, and external Video providers. Since these providers may collect personal data like your IP address we allow you to block them here. Please be aware that this might heavily reduce the functionality and appearance of our site. Changes will take effect once you reload the page.

The following cookies are also needed - You can choose if you want to allow them: